This just in:  The International Truth In Naming Tribunal [ITINT] has just issued a Court Order [ITINTO], requiring that the U.S. television broadcasting network known as PBS -- presently named the “Public Broadcasting System” -- immediately change its name to “The Plutocracy Broadcasting System”, and that its nightly news program, presently named “The PBS News Hour”, immediately change its name to “The Rockefeller Hour”, so that its new name, in full, is changed to --

Hypothesis.  The Truth-in-Naming Tribunal has not yet published a full account of its reasoning in promulgating this court order.  However, I wish to venture the following hypothesis as to the primary  reasoning behind this decision.

Circa 23 September 2015, the "PBS News Hour's" recurring feature, "Science Wednesday", began to reveal the "People Are Pollution", 'Humanocidal' "Iron Fist" behind the gossamer veneer of the new Rocke-Nazi-engineered neo-pseudo-Religion of Nature-Idolatry and Misanthopy, which they are using in the hopes of duping the working/middle classes of the U.S., the U.K., and Western Europe, etc., to, not only "shoot themselves in the foot", but to shoot themselves all over, and to shoot themselves to death -- to commit suicide -- by embracing the Rocke-Nazis' planned 'Global Warming Austerity'.

'Global Warming Austerity' is a key component of the way by which the 'Rocke-Nazis' plan to achieve their 'humanocidal', "Eugenics" goals, if the American people vote for the "Democratic" Party in the upcoming Presidential/Congressional elections, by making life unaffordable for the majority of Americans, e.g., through the escalation of energy prices, and of other prices of products and services whose production involves energy use -- virtually the entire economy.

Of course, if the U.S. voting majority embraces the "Republican" Party "alternative", then the 'Rocke-Nazis', who "own" both parties, will achieve the same 'humanocidal' goal by the wholesale repeal of the U.S. social safety net -- Social Security, Medicare, Unemployment Insurance, Food Stamps, and all the rest -- so that the U. S. federal government will supply only CORPORATE Welfare in the future.

But 'Global Warming Austerity' is clearly the Rocke-Nazis' preferred pathway to their "95% population reduction" goal, as articulated, by their spokes-servants, as quoted in the following earlier blog-entry herein --

-- entitled "As a scientist, is the pope dodging the biggest contributor to climate change?".


Now the big reveal of the real 'Rocke-Nazi' "eugenics" agenda, behind their global "climate change" prevention juggernaut:  the "biggest contributor" to "climate change" is, of course "human population", so that, to fight "Global Warming", "we" need to impose global "population control".

This article contains watered-down pronouncements from 'Rocke-Nazi' spokes-servant, and would-be global mass murderer, Paul Ehrlich.  The News Hour spokes-servants no doubt felt that their viewers were not yet ready for the full viciousness of [Nazi-]Dr. Ehrlich's actual views.


Ever since Rockefeller sources have become more prominent in the roster of "News Hour" funders, and since two of the "News Hours" principals -- Judy Woodruff and Margaret Warner -- have been inducted into the [Rockefeller "owned"] "New York Council on Foreign Relations" -- a major institution mediating Rockefeller-faction control of the U.S. federal government -- the "PBS News Hour" has become, more and more, the "PlutocracyBS Rockefeller Hour", and its "Science Wednesday" feature has become, ever-increasingly, a conduit for 'Rocke-Nazi' ideology, including pro-'Global Warming Austerity' propaganda.

Hence, in my view, the ITINTO decision. 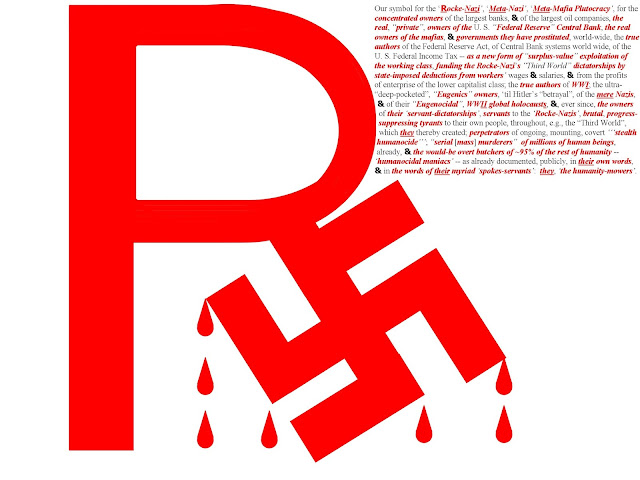