[Introduction] In this, third, episode, we introduce the second pillar of ‘Generalized Equity’ and of ‘Political-ECONOMIC DEMOCRACY’, which we have named ‘Citizens Birthright Equity’.

[Episode 3 Main Text: ‘Citizens Birthright Equity’ Overview.] The ‘Citizens Birthright Equity’ “Pillar”, to be financed, primarily, from the proceeds of the other two ‘Pillars of Generalized Equity’, would make every child born, every new citizen, a de facto “Trust Fund Baby”, equipped with an absolutely portable, personal “social safety net”, regardless of which “side of the tracks” that baby was born into, or which employer(s) that adult citizen later works for.  A good example of a proposal that approximates this “Pillar” of ‘Generalized Equity’ is the recent “Baby Bonds” proposal.

The ‘Citizens Birthright Equity’ human right constitutes also a new, constitutional property right -- a right of personal property.  It is also surrounded by built-in “moral hazards” mitigations.  This is because that personal property is sourced in and converted from social property, property that belongs collectively to all citizens.

By “moral hazards”, we mean perverse incentives that might unintentionally reward personally and socially destructive behaviors -- such as spending the social funds provided on illegal drugs.

In general, “moral hazard” is lack of incentive to guard against risks, and against the costs of those risks, because one is shielded from those costs by others, or by society as a whole.

Via ‘Birthright Equity’, society would ‘self-invest’ in every new citizen born, enough to give each new child the wherewithal for a socially supported decent start in life, regardless of the resources of that child’s birth family.

Thereby also, each new citizen would be more likely to feel valued by their society.  They would likely so feel because each would experience, by society’s grant to them of their ‘Birthright Equity Social Trust Fund’, material proof of their valuing by society, even if not by their birth family.  No child would be abandoned by their society, to fend for themselves, if they lacked parental support.  No child would be treated, as so often today, in a desperation-inducing and crime-breeding manner, as if the police, and as if society at large, would rather that they died young -- very young -- or that they were already dead, or that they had never even been born!

And, each new citizen would thereby also have “skin in the game”; would have something to lose should they nevertheless turn to an anti-social life of crime.  That is, if convicted of a crime, by a jury of their peers, such a citizen’s ‘Birthright Equity’ trust fund would be liable for the cost of jury-determined reparations to their victims.  If that ‘Birthright Equity’ trust fund were to be exhausted by such reparations, for example, due to very serious and/or repeated victimizations of others, then such a citizen would have to fall back upon their own earnings and, in the last analysis, upon much more meager general social welfare provisions.

SOME EXPECTED QUESTIONS, AND OUR RESPONSES.

We have stated, and responded to, key ‘FAQs’ we anticipate listeners and viewers will want answered.  We encourage you to send your actual questions, if not covered by these FAQs, incivilities excluded.

Expected Question: With regard to ‘Citizens Birthright Equity’; how could our society possibly afford the gigantic cost of this ‘pillar of generalized equity’?  To provide the approximately 327 million U.S. citizens each with a Social Trust Fund worth as little as 10,000 dollars would cost 32.7 trillion dollars, while U.S. GDP is only around 22 trillion dollars annually?

Response:  Clearly, the transition to “full coverage” of access, for each citizen, to essential life-opportunities would have to be scaled-up over time.  We favor initially limiting coverage to each year’s increment of newly-born citizens, so that future generations are covered first.  With new births in the U.S. at around 4 million babies per year, an initial level of the ‘Birthright Equity Trust Funds’ at 10,000 dollars per birth would require funding of 0.4 trillion dollars per year.  To avoid opposition to a “redistributionist” funding of ‘Birthright Equity’, we also favor a plan which adjusts the level of coverage for new-born citizens in proportion to the growth of the flow of funds to the ‘Birthright Equity’ pool from ‘Citizens Stewardship Equity Social Rents’, and from ‘Citizens Externality Equity’ pollution fees and fines.  In this way, the new system would be largely self-funding.

Expected Question: With regard to ‘Citizens Birthright Equity’; how would it ensure that the ‘Social Trust Fund’ monies are not spent on frivolous or damaging forms of consumption?

Response: Desired expenditures from a citizen’s personal ‘Social Trust Fund’ would be applied-for by that citizen to the ‘Commission for Birthright Equity’, which, per its constitutional amendment and statutory guidance, could approve or disapprove that application.  That citizen would have standing to appeal an unfavorable decision by the Commission to the “nearest”  ‘Tribunal for Citizen Birthright Equity’ that has jurisdiction for that citizen’s locale of residence.  The Justices of that Tribunal would be popularly elected by the Citizens of their jurisdiction, and would also be mandated, term-limited, and recallable by their electorate.  The losing party in such an appeal would be required to pay all of the court costs of that appeal, to ‘dis-incent’ frivolous applications and resulting frivolous litigation.

Expected Question: What are some local examples that could evolve into ‘Citizens Birthright Equity’-like programs?

Expected Question: How might we successfully scale down from the concept of a national scale ‘Citizen Birthright Equity’ human right and property right, to, say, one at a municipal scale?

How might we fund such a scaled-down version of ‘Birthright Equity’, at that level of a single city, as distinct from how it would be funded if instituted on a national scale, together with the other two “Pillars”?  How might we preclude, with a municipal-level, scaled-down version of ‘Citizen Birthright Equity’, a “gold rush” of people crowding into a municipality that was testing that ‘Citizen Equity’ benefit, from other cities not offering any such ‘Citizen Equity’ benefits?

Response:  This is a difficult problem, in relation to existing constitutional and statute law, because it might involve breaches to the principle of the “equality before the law” of every citizen.  With a full national ‘Citizen Birthright Equity’ system, no citizen would be excluded from ‘Citizen Birthright Equity Social Trust Fund’ coverage.  But, on any smaller scale, given the right of citizens to free movement, and to taking up residence in new localities of their choice, such local ‘Birthright Equity’ benefits would involve exclusion of “outsiders” and “interlopers” from coverage, to avoid unjust exploitation of this ‘Citizen Equity’ benefit by them.   If the ‘Social Trust Funds’ were supplied via municipal-level taxes, at least each tax-paying resident of the municipality should have to be eligible, or at least each of their newborn children should be eligible, for a ‘Social Trust Fund’.  But if such ‘Social Trust Fund’ eligibility would accrue immediately to anyone who newly established residence in that municipality, a “gold rush” could be expected, in which non-residents would, perhaps only briefly, become residents, obtain their ‘Social Trust Fund’ monies, and then perhaps quickly move out of that city -- move on, or move back to the city from which they came.  This would likely lead to quick exhaustion of the ‘Social Trust Funds’ monetary wherewithal, and to its accrual mostly to citizens who were never real, contributing residents of that municipality at all.  But restricting access based upon, e.g., cumulative taxes paid to, or duration of residence in, that municipality, might run afoul of the principle of the “equality before the law” of all citizens, and be challenged in court. 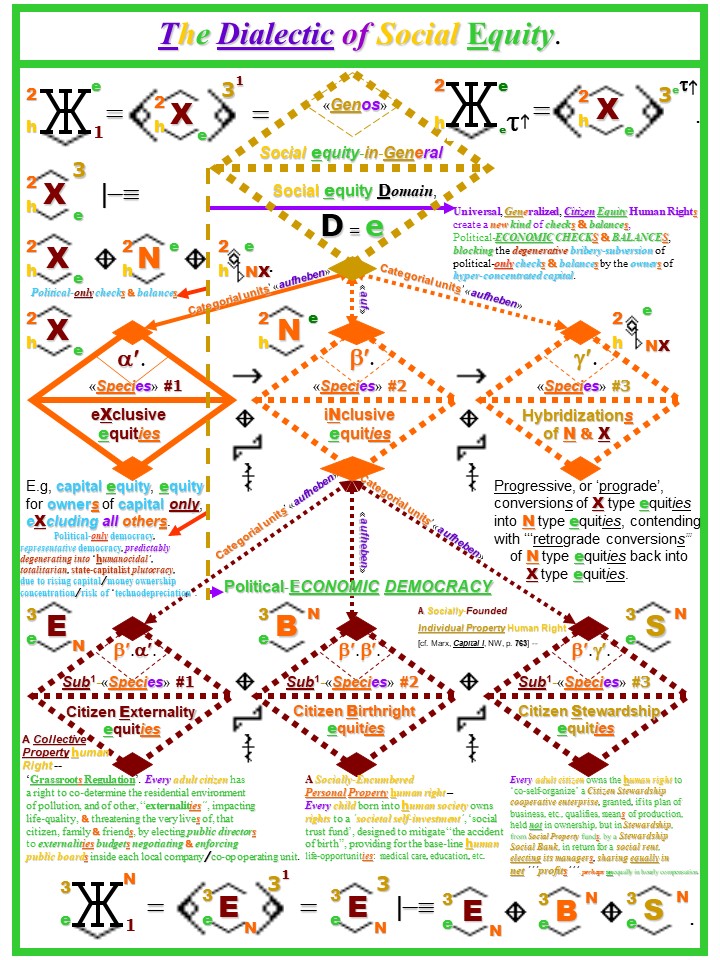 For more information regarding the

For partially pictographical, ‘poster-ized’ visualizations of many of these Seldonian insights -- specimens of ‘dialectical art’ -- see: