An editorial; opinion-piece in the Las Vegas Review-Journal this Monday “gave the lie” to the Rockefeller plutocracy faction’s ‘Global Warming Hysteria’.

The text of that editorial follows [source:  https://www.facebook.com/ReviewJournalOpinion/?__tn__=kC-R&eid=ARAigVcf_hm-8dNFSaLlJimnzbt6oX9TXxv1E9nSU_h1FHfKrgJ3XKqf6b83htzXmjt1YICTEwC8MzxW&hc_ref=ARSnYGw-r2G6i3ZHGBWJCZAiPojSWa_Z6x5APTIrBMdzx68XYfVoBitxbKTWkP7_rKI&fref=nf&__xts__%5B0%5D=68.ARD8JqeaKIqb7bV4X00prg-sOyIwYfgqDk1qebe6JHgWaQzvwX9uPNrLC-AVTUrzZ46RnbJw6DylyCg5tQ1wx9qTd70n4PDpgyAA6rpn3BKwHnwXfJ_-EoUNgkEBIuHTuR3zT1q7QI6gcyMxV9EnpZDamZ770cpnAY4bI_n7c5opHeDCW-It6I1xqjV8v2bdhvbv1OaG8pQc787CQBLH5r1351PD7yc0wFWA5VDurODRHBviil78T9nyUJqIhWhY6O4wOr6Enu4w659cHbZiJThQVeC_cwMR7804LIjGIBjpepr5FzMuNB_KUSWb9O4isLQ4WY0G2IJEw6xiCV8IJ3w] --

“A well-known environmentalist has asked forgiveness for blowing concerns about global warming out of proportion. His candor speaks volumes about our current political discourse.”

“ “On behalf of environmentalists everywhere, I would like to formally apologize for the climate scare we created over the last 30 years,” Michael Shellenberger wrote last month. “Climate change is happening. It’s just not the end of the world. It’s not even our most serious environmental problem.” ”

“Mr. Shellenberger may not be a household name, but his credentials as an environmental expert are top-notch. As he wrote, he’s been asked “to provide objective expert testimony” by Congress. The Intergovernmental Panel on Climate Change invited him “to serve as an expert reviewer of its next assessment report.” ”

“He’s no right-winger. He once fundraised on behalf of the Rainforest Action Network. He once “lived in Nicaragua to show solidarity with the Sandinista socialist revolution.” He worked with the Obama administration to invest tens of billions of dollars into renewables.”

“Despite harboring concerns about overwrought rhetoric frequently spewed by global warming alarmists, he stayed silent out of embarrassment and fear.”

“I remained quiet about the climate disinformation campaign because I was afraid of losing friends and funding,” Mr. Shellenberger wrote. “The few times I summoned the courage to defend climate science from those who misrepresent it I suffered harsh consequences. And so I mostly stood by and did next to nothing as my fellow environmentalists terrified the public.” ”

“That changed last year when the alarmism reached a fever pitch. Rep. Alexandria Ocasio-Cortez said the world would “end in 12 years.” A green journalist, Bill McKibben, said climate change would “wipe out civilizations.” Seeing the fear this caused around the world and in his own teenage daughter and her friends, he decided to speak out.”

“Here are some of the findings he’s sharing that fly in the face of environmentalist dogma. For one, “climate change is not making natural disasters worse.” For instance, wildfires have gone down by a quarter since 2003. He attributed larger and more dangerous fires in Australia and Canada to “the build-up of wood fuel and more houses near forests, not climate change.” ”

“He believes the key to reducing carbon emissions isn’t green energy but more nuclear power. He found that “100 percent renewables would require increasing the land used for energy from today’s 0.5 percent to 50 percent.” He also noted that “wood fuel is far worse for people and wildlife than fossil fuels.” ”

“Mr. Shellenberger’s honesty is refreshing. To solve environmental problems, the public and policymakers need honest and nuanced data, not doomsday predictions intended to push an agenda through fear and misinformation.”

That ‘Global Warming Hysteria’, whipped-up by the Rockefeller-controlled “Fake News Media”, is really just a cover for the Rockefeller Faction’s longstanding “Eugenics”/‘Humanocide’ agenda -- to murder 95% of the human race, because “People Are Pollution”.

The Rockefeller plutocrats don’t really give a hang about “ecology”, “the environment”, or the biosphere.

All that they care about is preserving their power, and its ultra-perverted perks.

And they see the rising “middle class” of educated workers world wide -- in the U.S. and in Europe, but also in China, in Russia, in Brazil, in India, in South Africa, and elsewhere, as well as their rival, the ‘Trump Faction’ of the capitalist ruling class -- as the ultimate threat to their perverted power.

We really can’t call the Rockefeller Faction’s ‘humanocidal’ agenda a secret conspiracy, because they, and their spokes-whores, have stated this agenda publicly, so often, and for so long.  For many examples of these ultra-criminal pronouncements, see --


The Rockefeller Plutocracy thinks that they can get away with these public admissions because they think that they and their “Fake News Media” have reduced you to such ‘dumbed-downed-ness’, to such ill-health, to such weakness, to such despondency, to such media-deludedness, and to such buy-in to their Manufactured Ideologies and their ‘LIE-ence’, that you are no longer capable of resistance to their ‘humanocidal’ plans to murder you and your family.

FIGHT BACK! -- Fight for Your Life and for the Lives of Those You Love, Before it is Too Late!
Miguel Detonacciones,

For more information regarding these Seldonian insights, please see -- 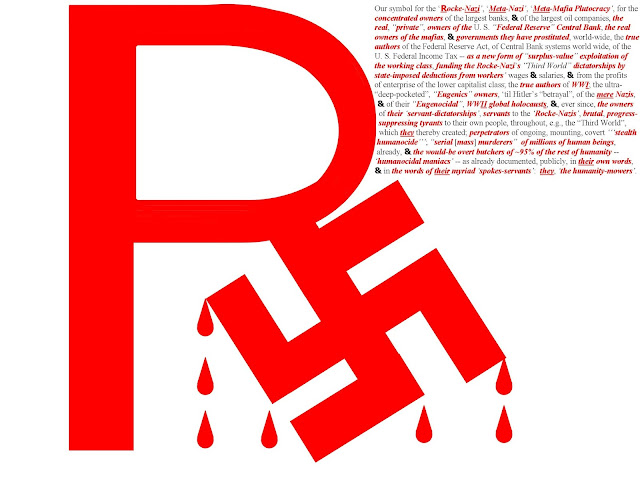