Our Proposed Article of Amendment #28 to the U. S. Constitution targets the establishment of a grass roots ‘political-ECONOMIC DEMOCRACY’ in the United States, via the institution of three new «species» of human rights, which are also three new kinds of all-citizen property rights, named ‘Citizen Externality Equity’, ‘Citizen Birthright Equity’, and ‘Citizen Stewardship Equity’.

A key to the genesis of these proposals is a realization of the ‘human «species» risk management’, the ‘societal risk management’, and the ‘individual citizen risk management’ measures that are necessary to secure a decent probability of humane and enriching life for the majority of Citizens.

This realization arises out of our collective experience of ~500 years of the capitalist system, developing toward the full incarnation of its essence, and of more than a century of the horrific ‘descendence phase’ of capitalism -- WWI, ‘Global Great Depression I’, Fascist and Stalinist police-state, totalitarian, genocidal State-Capitalism, WWII, ‘Global Great Depression II’, and, most recently, the ‘humanocidal’ “People Are Pollution” ideology that has been spread globally by the ‘Rocke-Nazi’ ruling faction of the capitalist ruling class, openly seeking to exterminate “95%” of the human race --
https://capitalismsfundamentalflaw-wayforward.blogspot.com/2013/03/plutocracy-publicly-proclaims-planned.html

One of the greatest threats to Citizens today is the escalating threat of agonizing debilitation and premature death due to what capitalist economists call pollution, etc., “externalities”.

The ‘Citizen Externality Equity’ human right, and collective property right, is designed to shield the majority citizenry from the otherwise ever-intensifying, ‘ever-densifying’ production of pollution, etc., “externalities” that is of the essence of late capitalism, by empowering citizens, at the grass roots level, by democratic means, to defend their families lives, their homes, and themselves against the “externalities” onslaught of a capitalist ruling class whose ruling faction is ‘humanocidal’.

Another of the great threats to humane life, and even survival, under late capitalism, is the torn and tattered patchwork of ever-politically-threatened “social safety net” provisions, through employer-tied “unemployment insurance”, “health insurance”, “401(k) retirement plans”, etc.

As we have experienced so often of late, one “recession”, “Great” or otherwise; one lay-off; one prolonged stock market crash, can wipe out retirement “life savings” overnight, eliminate employer-based “health insurance”, throwing the formerly employed into insufficient incomes via employer-tied “unemployment insurance”, forcing defaults on mortgages, loss of home equity, and homelessness.  Just one such event can destroy an entire family.

The ‘Citizen Birthright Equity’ human right and personal property right is designed to create a social safety net that is tied to each individual Citizen, from birth -- not tied to a, typically transient, lay-offs prone employer -- and which is, hence, totally “portable”.

Each individual ‘Citizen Birthright Equity Social Trust Fund’ is designed to provide that individual Citizen with a fair chance at life, regardless of what “side of the tracks” that Citizen was born on.

It tells each Citizen that her or his Society values him or her, because it has invested in him or her.

It gives that Citizen “skin in the game” -- a “stake” in that Society -- and gives that Citizen the wherewithal to pay for higher education and/or skills training, without becoming a debt-slave for life; to buy a first home; to start a first business; to have health care coverage; and to have sufficient income, even during periods of unemployment, e.g., due to Capitalist recessions and depressions.

These ‘Social Trust Funds’ are to be funded, in large part, from the ‘externality fines’, ordered by the ‘Citizen Externality Equity’ elected ‘Public Boards’, and by the monthly ‘Social Rents’ paid by ‘Citizen Stewardship Equity’ producers’ cooperative enterprises, in return for the usufruct of the ‘Social Property’ that constitutes their means of production, etc.

Another deadly hazard of Modern -- Capitalist -- “life” is capitalist employment, the Capitalist labor market,- dominated by owners of increasingly-concentrated capital wealth, who think of workers, or, at least, who act, under market pressures, as if they think of workers, as mere, expendable ‘Capital fodder’.

The ‘Citizen Stewardship Equity’ human right, and social/individual property right, is designed to offer Citizens an alternative to capitalist dictatorship in the work place, and to the increasingly deadly working conditions that unchecked capitalist oligopolists are willing to offer them.

Then too, the remaining capitalist enterprises will have to compete against the ‘Citizen Stewardship Equity cooperatives’, to attract workers, i.e., competing against enterprises in which workers set their own working conditions.

There is another, mortal hazard of Modern “life” -- of ‘Descendence Phase Capitalist’ “life” -- that the ‘Citizen Stewardship Equity’ human right/individual property right is designed to redress:  the ever-deepening ‘political immiseration’ of the majority of citizens, as their relative share -- and even absolute share -- in their society’s income and wealth plummets, in relation to the ever increasing concentration of monetary Capital wealth in ever-fewer, capitalist, plutocratic hands.

Thereby, the semblance of representative democracy and of political checks and balances in the U.S. has become increasingly hollowed- out, as a rising capitalist plutocracy, comprising a handful of families, has “bought out”, and, indeed, prostituted, in a “hostile takeover”, the legislative, executive, and judicial branches of U.S. political government “lock, stock, and barrel”, plunging the country toward a deepening plutocratic -- and ‘humanocidal’ -- police-state dictatorship, USA “PATRIOT” ACT, et al.

This, we hold, will gradually, and with at first slow but gathering acceleration, shift away from the situation in which virtually all incremental wealth, produced by society as a whole, accrues to the plutocratic few, with only a pittance of “maintenance funds”, barely sufficient even to sustain the current generation of the majority of workers through their next day of work, let alone to reproduce the next generation of workers, with higher education costs, home purchase costs, health care costs, automobile costs, insurance costs, retirement costs, etc., etc., all escalating rapaciously, far beyond the CPI rate of inflation.

We hold that the ‘Citizen Stewardship Equity’ human right/universal property right will, over time, right the historic wrong of the relative pauperization, and, thereby, the political enfeeblement, of the vast majority of Citizens.

By means of ‘Citizen Stewardship Equity’ what now passes, as profits, into the hands of an ever-shrinking, plutocratic, ‘humanocidal’ few, will, instead, increasingly pass into the hands of its main producers, the majority of Citizens. 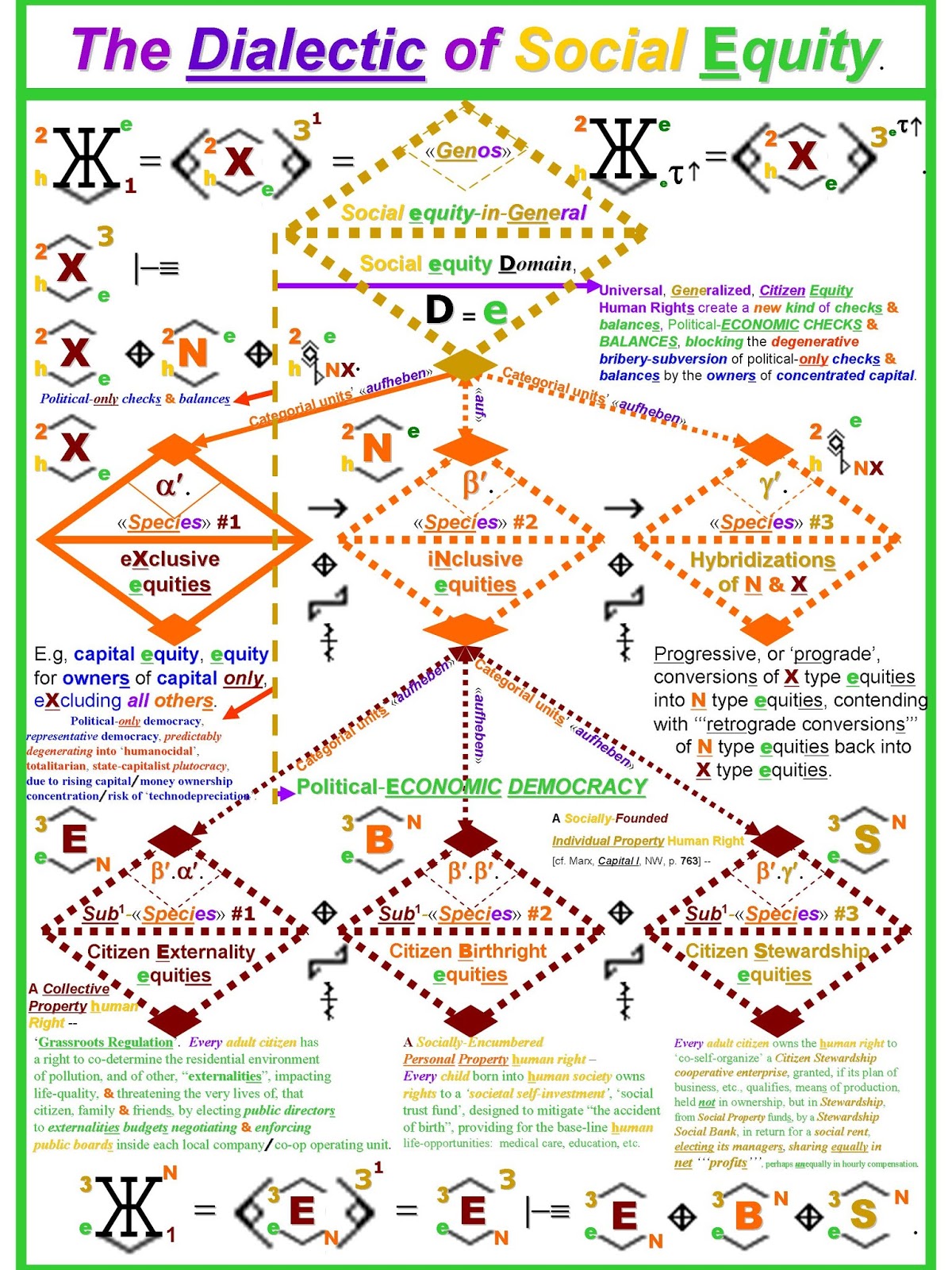