ANNOUNCEMENT: Released Today -- A DIALECTICAL "THEORY OF EVERYTHING", Volume 2.

ANNOUNCEMENT:   Released Today -- A Dialectical Theory of Everything -- Meta-Genealogies of Our Universe and of Its Sub-Universes -- A Graphical Manifesto.


The General Council of F.E.D., has, today, released, for access by the public, volume 2 of their treatise, entitled A Dialectical Theory of Everything -- Meta-Genealogies of Our Universe and of Its Sub-Universes -- A Graphical Manifesto.

The specific title of this new volume, volume 2, is Dialectical ‘Meta-Models’ of ‘The Human Phenome’.


Their overall plan for this five volume treatise is --

The F.E.D. General Council has previously disclosed that, so as to more protractedly preserve from disclosure the particulars of the discovery of the Seldonian systems of “the mathematics of dialectics”, volume 1 will be published last of all.

The table of contents for volume 2 is attached, below. 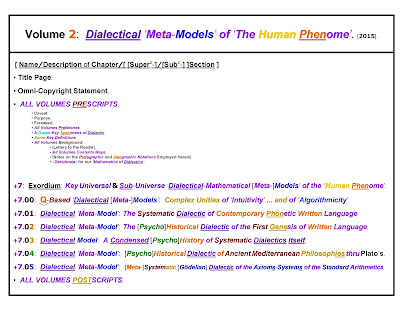 Posted by Miguel at 6:40 PM No comments:

Field Notes: Guest Author -- "This Is What I Stand For".


My field assignments for the Foundation are a source of great personal satisfaction to me.

I often encounter citizens who attain extraordinary insight into, and discernment of, what is afoot in our present -- living -- history, despite the lack of access, by such citizens, to anything like the Foundation's research archives, or its internal analytical culture.

Today's anonymous "Guest Author" is a case in point, as reflected in that author's "statement of conviction", reproduced below.

"I feel the following needs to be stated, but either I will be looked at as right on the money or (possibly) placed on the watch list by the creeps of the world."
"I care not - this needs to be said:
I have done years of research -- research carried on free of vested interests' meddling and coercion -- into the FACTS regarding planetary weather and climate, and my report, which is available to anyone, shows, based upon factual material, that "global warming" is a false claim, based upon faulty science." "The ones pushing this myth cannot make those claims in scientific honesty." "The ones pushing it are, from all available evidence, seemingly pushing it for motives that have NOTHING to do with the betterment of the masses and which are actually FOR the benefit of the Power "Elite", so that this tiny criminal "elite" can gain more power, influence and dominance over the freedoms and the lives of all of the other people in this world." "I do not concern myself with whether the planet is overly cooling or overly warming." "Since I have NO vested interests, I am free to look at ALL the facts and that path has led me to see that the claims of "global warming" are a myth." "And that the Earth at some point in the not-too-distant future will again host another world wide ice age." "With the Trillions of dollars that the Power "Elite" has at their disposal, if they were truly ethical, truly caring individuals -- if they truly cared about people -- they would be assisting in planning NOW for the coming weather and climate changes which WILL make it difficult to support 7 billion or more people on this planet." "Instead they are hoarding their money and preparing to support only their selected "elite", and close servants, and to support, covertly, human genocide on a scale the planet has never witnessed previously." "They plan, again covertly, to reduce the Earth's populations by the billions, utilizing ANY means by which this reduction can be achieved, no matter how vicious, whether that be by degrading our food supplies, our water, our air, deploying dangerous substances into the vaccines which our children are forced to be injected with, drugging our school population with equally dangerous psychiatric drugs, as well as other covert means for disposing of the populations that they deem to be "expendable"." "It is a sad, but factual commentary on some individuals that they could sink into such depths of insanity, psychosis and paranoia; that they would actually support such measures against their fellow humans." "Only when one KNOWS how the anti-social personality operates, and thinks, and knows what drives them, can one know that there can be individuals so twisted." "Our hope, my hope, rests with the bulk of humanity who are ethical, honest, productive individuals." "It is time to turn the tide against such mad individuals who have proven, by their own actions, that they do not deserve to be in such positions of power, as they have NOT demonstrated that they hold that power with any responsibility, other than to their own twisted, self-serving agendas." "It is time for the decent people of this world to rise up and to take over the reins of power and control and responsibility, because those decent people will do the best for the most number of people IN this world." "THAT is how one builds a new civilization, founded upon a bedrock of ethics, decency, productivity and honesty." "The time to start this process is NOW!"
"I support ALL people who want to live in such a world.  This is what I stand for."

Posted by Miguel at 3:20 PM No comments:


This just in:  An International Truth-In-Naming Tribunal Order [ITINTO] has just been issued, requiring that the name of the Syrian city of "Raqqah" be changed, immediately, into its now TRUE NAME --