In this blog-entry, below, I remark upon the recent “successes” of the ‘Rocke-Nazi’ Ruling Class Ruling Faction in the U.S. as part of their Global Pogrom for ~95% plummeting of the global human [working class] population.

GLOBAL STRATEGIC HYPOTHESES.  U.S. life expectancy is down for a second straight year, largely due to the recent epidemic of overdose mass death initiated by the Rockefeller-AMA, and Big-Pig Pharma, via an exponential surge in AMA physicians’ prescriptions of opioid drugs.  The ‘PlutocracyBS’ News Hour anchor, in reporting this horrific development --

-- responded, if not with “crocodile tears”, with ‘crocodile eyes’, feigning distress at this massacre, but, behind her eyes, we believe, gloating over this “achievement”, by her ‘Rocke-Nazi’ masters, in moving toward fuller implementation their publicly proclaimed plan --

This plan is key to their global war on “the social forces of production”, whose further growth threatens to ‘technodepreciate’, to near zero residual value, the bulk of their ownership-hyper-concentrated fixed capital and loan-capital assets, globally, e.g., in the global petroleum industry, e.g., due a looming global deployment of fusion power [if they fail in their decades of manipulations and assassinations to derail fusion power development]. 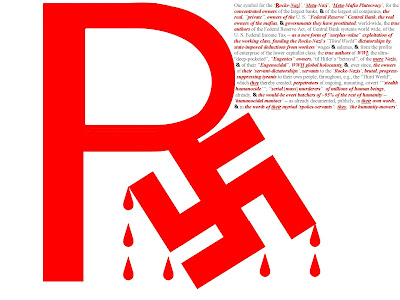