Evolutionary Theory Beyond “The Modern Synthesis”.

Evolutionary Theory Beyond “The Modern Synthesis”.

I recently posted a comment to an [old] blog-entry, entitled “Is the “Modern Synthesis” Effectively Dead”, at --

This new tradition is even critical of the very term “natural selection”, because of its subliminal connotations of some human-like agent [as in the “artificial” selection involved in human domestication of plant and animal species], i.e., some [pseudo-]subject, even some “divine” agent, “choosing” genomes, whereas the scientific essence of the Darwinian paradigm is one of differential rates of self-reproduction of populations, such that the populations exhibiting the highest SUSTAINED rates of self-expansion/of self-reproduction are the “fittest”.

More central to this new tradition is an evolutionary paradigm that extends -- and rigorously so -- the category of “evolution” to trans-genomic processes, and, hence also, to ‘meta-dynamics’ of ‘self-developing process’ in our cosmos that arose both before and beyond “biological evolution” per se, via their concept of ‘self-meta-unit-ization’, or of ‘self-meta-holon-ization’.

This new evolutionary paradigm can be stated, in general form, as follows:  populations of individual units of a given kind arise, by an earlier process of ‘meta-unit-ization’, which then successfully self-reproduce in expanding quantities [quantitative change as “mere” evolution], to the point where local ‘physical-spatial concentrations’, or ‘self-densifications’, of those units become sufficient to trigger the next consecutive step in ‘meta-evolution’; the irruption [‘meta-evolution’ as qualitative, ontological change, via a kind of ‘metafinite singularity’] of a new kind of units’ populations, via combinations of some of these units into ‘meta-units’, each such ‘meta-unit’ being made up out of an organized, heterogeneous multiplicity of its predecessor units.

Specific cases of this general ‘meta-evolutionary meta-dynamic’ would include the irruption of eukaryotic living cells from ‘pre-eukaryotic’ or “prokaryotic” living cells, by “endosymbiosis”, or “symbiogenesis”.

But such specific cases would also include the irruption of “composite” bosons and fermions from their “non-composite” brethren/ancestors; of atomic nuclei from composite “particles” [protons and neutrons] in “cosmological nucleosynthesis”, and; of molecules from atoms, e.g., in primordial “atomic clouds”, self-becoming “molecular clouds” -- all pre-biological cosmological phenomena.

Such specific cases of ‘meta-evolution by population meta-unit-ization’ would also include the formation of humans-led ‘meta-societies’, wherein multiple “social animal” and ‘social plant’ species-populations, as units, unite to form a higher kind of unit, via ‘‘‘mutual domestication’’’.

Writings about this new [meta-]evolutionary paradigm are available via:  www.dialectics.org . 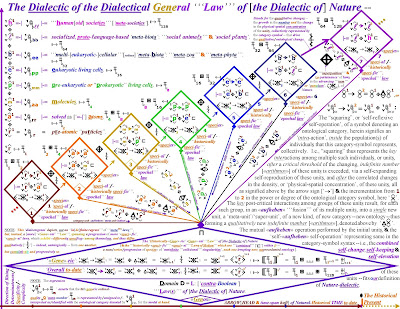