A reddit participant recently posted, and commented upon, an F.E.D. ‘dialectogram’, on one of our conjectures as to the opening triad of our version of the ‘dialectic of Nature’, at --

The ‘dialectogram’ there posted is a variant of the following -- 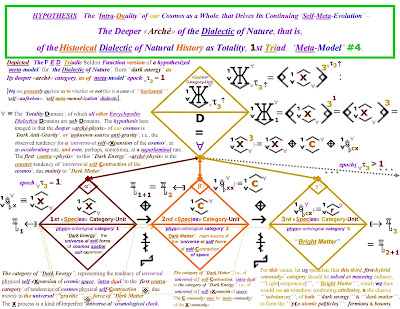 This poster’s comments included the following --

“This is true art.  I am actually in awe of how much effort this person has put into this stuff.”

“The 9 axioms, grounding the arithmetic/algebra for dialectics applied in the diagram posted above, are stated, within the www.dialectics.org web site, at -- 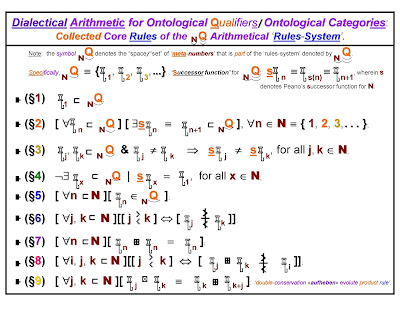 “That these 9 axioms incorporate a version of the first four, “first-order logic” axioms of the “[Dedekind/]Peano Postulates” for the system of arithmetic of the “Natural” Numbers, makes this arithmetic/algebra for dialectic a “non-standard model” of the Natural Numbers.  Such were foretold by the co-application, at the level of “first order” logic, of the Gödel Completeness and Incompleteness Theorems -- two of the deepest theorems of modern “mathematical logic”. An intuitive, dialectical derivation of the system of these “dialectical meta-Natural meta-numbers” from that of the standard “Natural Numbers” is available, within the www.dialectics.org web site, via --

“That these 9 axioms suffice to deductively derive, as a theorem, by a simple direct proof, a STRONG CONTRARY to what Boole called his “fundamental law of thought”, or “law of duality”, which is the core “axiom” of original Boolean algebra, makes this arithmetic/algebra of dialectic a “contra-Boolean algebra” -- an algebraic dialectical logic.  This simple direct proof is presented, within the www.dialectics.org web site, here -- 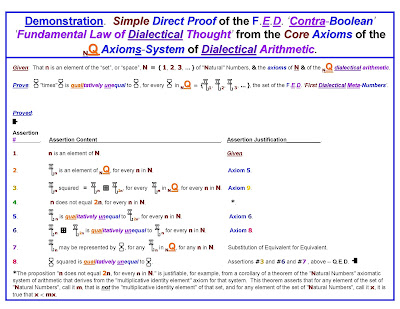 “The www.dialectics.org site also recognizes a third axioms-system of dialectical- algebraic logic, one which reconciles the opposition between the Boolean and “contra-Boolean” algebras, in[to] a single ‘uni-system’ of dialectical algebra, incorporating and integrating both.”