The ‘‘‘Political-Economic Law of Motion of Modern Society’’’ --

GLOBAL STRATEGIC HYPOTHESES.  The “capital-relation” [Marx], as predominant, all-dominating “social relation of production” [Marx], and the total, global socio-politico-economic system of capitals, and the entire, “historically-specific” ‘human Phenome’, that grows up around the capital-relation’s core, “the elementary form of [commodity-[capital]-]value” [Marx], has a “fatal flaw”, one whose manifestation intensifies with the growth of the “social forces of production” [Marx] itself also ‘incented’ by the capitals system itself -- a “fatal flaw” which is fatal for the capital-relation and its system for sure, and fatal also for the planetary human[oid] species as a whole, that incarnates the capital/wage-labor-relation, unless that species in general, and the global-majority working/middle class of that species in particular, is provoked to intervene in the course of the development of this “fatal flaw”, so as to create a higher successor system to the capitalist system, a system of ‘political-ECONOMIC DEMOCRACY’.

That “fatal flaw” is rooted in the ‘intra-duality’ at the heart of the capitals system.

And the balance between these ‘capital-anabolic’ and ‘capital-catabolic’ processes shifts as the process of accumulation of capital proceeds, and as the growth of the social forces of production ensues there-within.

Capital is ‘self-expanding value, by the re-conversion of profit-of-enterprise -- and of the “relative surplus-value” [Marx] therein contained and augmented as the growth of the social forces of production, ‘incented’ in capitalist competition, ensues -- into new industrial capital plant and equipment, and into new, loanable banking capital, as well as into new “variable capital” [Marx].

In the first phase of the global, capitals-system -- of world-market capital accumulation -- the growth of the “social forces of production” still creates more new capital, in the form of re-converted new “relative surplus-value”, than that growth destroys, in the form of “morally depreciated” [‘technodepreciated’] older vintages of fixed capital plant and equipment, and of insolvency resulting in “non-performing” large, long term bank loans to older industrial firms for their purchase of fixed capital plant and equipment.  This first  phase of capital accumulation constitutes the ‘‘‘ascendence phase’’ of the global capitals-system.

But in the second phase of that planetary capitals-system, which began in the late 1800s C.E./B.U.E ‘Great Techno-Deflation’ on this planet -- of world-market capital accumulation -- the growth of the “social forces of production”, for the concentrated core industrial capital of concentrated-ownership core capitalist ruling class, as the fixed capital plant and equipment composition of their capital increases to become the predominant component of their capital property mass, and value, begin to destroy more “old” capital-value than the value of “new” capital that it creates.  This second phase of capital [dis-]accumulation constitutes the ‘‘‘descendence phase’’ of the global capitals-system.

The ruling faction of the core capitalist ruling class, as already a class-for-itself, and a class collective-psychologically -- ‘‘‘psychohistorically’’’ -- positioned to become aware of this ‘technodepreciation’ fatal flaw of the capitalist system before the other classes, and, especially, before the working/middle class, undergoes a ‘psychohistorical trauma’, and a ‘psycho-sociopathic ideological self-degeneration’, as it realizes that its OWN capitalist system has, lawfully, turned against it, and now threatens to dethrone it from its power to rule over global capitalist society, by destroying its capital, the social basis of its power, and with that ‘techno-depreciation’ destruction of capital-value, also all of the “perks” of that ruling power.

In reaction to this “antinomy”, this ruling faction of the capitalist ruling class [the Rockefeller, ‘Rocke-Nazi’ faction] adopts, and massively funds, Malthusian “eugenics” ideologies for mass murder against the global working class -- thereby attacking the very core of the “social forces of production”, the working class population itself.

That ruling class, also in reaction to their discovery of the ‘techno-depreciation’ fatal flaw of their racket, imposes [1913 C.E./B.U.E.] “income taxes” on core working-class wages, etc., to finance the imposition of industrialization-blocking military dictatorships, comprador dictatorships, etc., all over the periphery and semi-periphery of the capitalist geographical core -- the periphery and semi-periphery that then, thereby becomes the “Third World”.

That core ruling class faction also imposes “Federal Reserve” style “Central Banks” on the nation-states of the capitalist core, so as to enforce a ‘controlled, gradual-exponential hyperinflation’ which continually lowers the real wages of the working class, by continually reducing the buying power of their nominally the same, or even slightly-rising, wages and salaries. 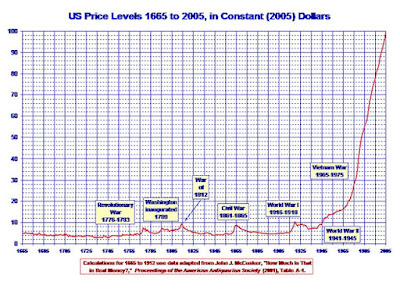 This is accompanied by, and furthers, the collusive, state and oligopolistic disadvantaging of smaller, more-competitive capitalist enterprises, e.g., in their “terms of trade” with the core capitalist ruling-class-owned oligopolies.

This further disadvantages the smaller capitalist enterprises, by enabling those oligopolies to suppress the otherwise competition-enforced ‘techno-depreciation’ write-down of their obsolescent fixed capital plant and equipment, so as to enable them to charge prices, to the smaller, more competitive capitalist enterprises, that demand full depreciation charges on the historical, original value of that obsolescent, oligopolized capital plant and equipment, from the smaller, more competitive enterprises that also face the full brunt of the competitive ‘technodepreciation’ of their own capital assets, thus accumulating “fictitious value” and “fictitious capital” potential, depression-inducing illiquidity.

‘‘‘Descendence-phase’’’ is destined to converge on a global system of totalitarian, police-state, state-capitalist national super-corporations, in permanent, “antagonistically-cooperative”, “Malthusian” world depression, and world war with one another [Orwell], unless or until the world working class intervenes, to create a higher successor “social relation of production”, characterized by ‘political-economic democracy’, which we of F.E.D., and which the Equitist Advocacy group, call ‘Equitism’, or ‘Generalized Equity’.

The “checks and balances” among the executive, legislative, and judicial branches of ascendence-phase capitalist national governance, that gave democracy and universal human rights a chance to begin flourishing, were lawfully destined to be undermined, progressively, by the accumulation of capital itself -- by the concentration, consolidation, and centralization of capital-money in ever-fewer hands -- enabling those “fewer hands” to “buy-out”, to prostitute, all three branches of political governance to the single class-will and class-agenda of those “fewer hands”.  But the “law of motion of modern society”-destined discovery of the ‘technodepreciation’ fatal flaw of capitalism, first by that ruling “class-for-itself”, made this movement toward Orwellian totalitarian state-capitalist dictatorship deepen and accelerate “with a vengeance”, the “vengeance” of a traumatically, ‘psycho-sociopathically’ deranged ruling class faction, the “eugenicist”, ‘Rocke-Nazi’ faction, that had discovered that its “own” system had turned against its rule, and thus against it as such.

It must also be recognized, however, that there is a lawfully-destined “intra-duality” within the ‘‘‘descendence-phase’’’ capitalist ruling class itself, as exemplified by the distinct strategy and agendas of, and the conflict between, the Franklin Roosevelt faction, and later, the Kennedy faction, of that ruling class, vis-a-vis the strategy and agendas of the Rockefeller, “Eugenics”, ‘Rocke-Nazi’ faction.

More about this latter development is to come.

FYI:  Much of the work of Karl Seldon, and of his collaborators, including work by “yours truly”, is available for free-of-charge download via -- 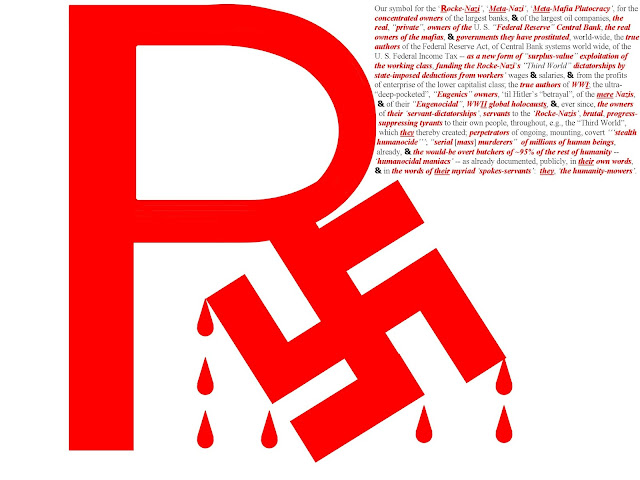