The “Yellow Vest” Insurgency in France + -- The Popular/Populist Global Fight-Back Against the Rocke-Nazis’‘Global Warming Austerity’ Stealth Humanocide Pogrom has Begun!

The “Yellow Vest” insurgency in France, now spreading to Belgium and beyond, is an early chapter in the inevitable popular uprising against the primary ‘Humanocidal’ Pogrom of the Rocke-Nazi, 'Meta-Nazi' plutocracy:  ‘Global Warming Austerity’.

This will be a fight to the death against the ‘Global Warming Austerity’ ploy of that Rockefeller-dominated plutocracy, which is purportedly designed to “Save The Planet”, but is really aimed at “SAVING ROCKEFELLER POWER”, and all of the perverted perks of that “above the law” Separate Power, by escalating energy costs for ordinary citizens -- e.g., monthly utility costs for electricity, natural gas, etc. -- so high that their very lives become “unaffordable”, as detailed in earlier blog-entries hereto.

But this fight to the death against the HUMANOCIDAL, ultra-sadistic psychopaths and sociopaths of the Rockefeller ruling faction, will force that ruling faction into non-violent capitulation -- as it did the ultra-vicious psychopaths and sociopaths of the Russian Stalinist ruling bureaucracy -- if enough of a majority or plurality of citizens, world-wide, wakes up in time to their ultra-peril at the hands of the Rockefeller ‘Global Warming Austerity’ Global Pogrom. 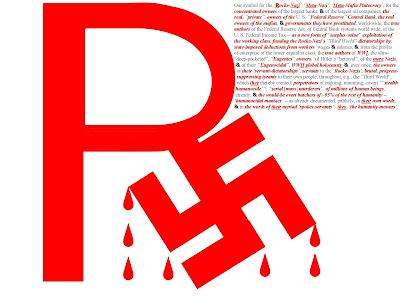