The checking-and-balancing of capitalism’s deadly downsides -- the ‘socio-political-economic’ ‘‘‘containment’’’ of the “externality” inequities of the “market failures” of descendence-phase capitalism; of its rising ‘hyper-inequality’, and of its tendential degeneration of democratic institutions into Orwellian, totalitarian, ‘humanocidal’ dictatorship, due to the plutocratic prostitution of those formerly democratic institutions, and due to the ‘humanocidal’ desperation of the descendence-phase capitalist ruling class, facing accelerating and deepening rates of ‘techno-depreciation’ of their hyper-concentrated capital assets -- requires the popular establishment of new, higher «species» of social-political-economic equity as constitutionally-backed basic human rights, and as universal, all-citizens forms of “individual property”, owned personally by each and every citizen.

1. ‘Citizen Externality Equity’ is designed to ‘‘‘contain’’’/economically “check-and-balance” Capital-equity ‘‘‘from within’’’, via popularly-elected, mandated, and recallable Boards of Public Directors vying, inside each local operating unit of, e.g., a polluting enterprise, whether capitalist or producers’-cooperative, with the Management Committee of that local operating unit, to reduce the annual production of pollution and/or other externalities by that enterprise, with recourse to popularly-elected, mandated, and recallable Justices, forming ‘Tribunals for Citizen Externality Equity’, deciding in case of deadlock in the negotiations between the publicly-elected Public Board and the governing ‘‘‘Private Board’’’ of each such enterprise.

2.  ‘Citizen Birthright Equity’ is designed to ‘‘‘contain’’’/economically “check-and-balance” Capital-equity ‘‘‘from without’’’, by limiting the degree of desperation, hence of vulnerability to exploitation, of workers.  It limits the degree of exploitation of wage-workers that Capital-equity can get away with, since, if exploitative abusiveness increases beyond a definite degree, many workers will choose to live from their ‘Citizen Birthright Equity’ Trust Funds, rather than submit to that degree of abuse, or worse.

3.  ‘Citizen Stewardship Equity’ is designed to ‘‘‘contain’’’/economically “check-and-balance” Capital-equity in direct competition therewith, by competitively and ‘marketistically’ limiting the excesses of capitalist oligopolies, etc., by surrounding Capital-equity enterprises with market competition from ‘socialized producers’ cooperatives’, giving workers an alternative to ‘‘‘wage-slavery’’’ or ‘salary-slavery’ to the owners of Capital-equity, by way of the constitutional right to form democratically-managed, competing, at-risk ‘citizen stewardship collectives’, which, if their business plans qualify in the eyes of a competing, at-risk ‘Social Bank citizen stewardship cooperative’, are granted the means of production, etc., required to actualize those business plans, in return for a social rent paid on those means of production, etc., e.g., among its other purposes, to encourage economy in the use of such means of production.

Constitutionally and actually instituting these three higher «species» of [inclusive] social equity to the, originally lone, Capital-equity [exclusive social equity] «species», would mean ‘‘‘correcting’’’ the capitalist system for the abuses inherent in the increasingly economically unchecked power of the ever-shrinking, ever-more-capital-concentrated and capital-wealthy capitalist ruling class plutocracy, which wealth that plutocracy uses to prostitute all three branches of political government, thus destroying the constitutional political checks-and-balances that held sway somewhat during the ascendence-phase of the capitalist system.

A popular movement strong enough to constitutionally and actually institute these three higher «species» of social equity would thereby also tend to generate a popular, potentially non-violent, rule-of-law transition to a new prevailing social relation of production:  ‘«gene»-ralized equity’ itself. 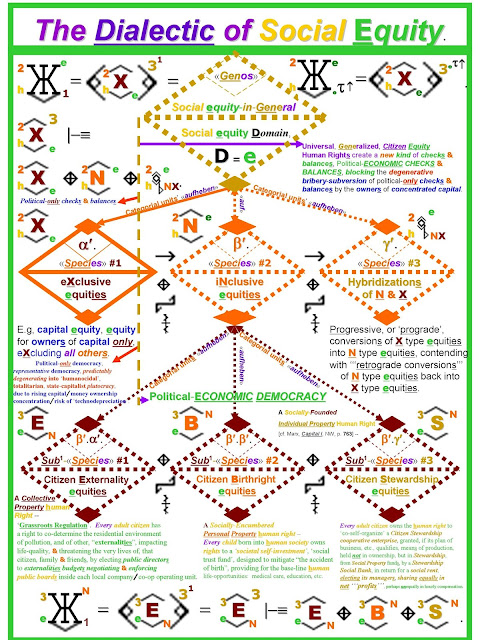