This blog-entry contains the seventh part of my serialization, within this blog, of the E.A.g.’s [Equitist Advocacy group’s] “Way Forward” proposal, entitled “Alternative to the "Lawful" Totalitarian, Humanocidal Self-Degeneration of Capitalism -- Political-Economic Democracy”, with my own edits added to their text, for its improvement [improvement, at least, to my way of thinking!].

In my opinion, this text is too valuable to be treated as any kind of “sacred text”.

It needs to be “improved upon”, and circulated, «samizdat», worldwide, in such “improved” editions -- i.e., in as many versions as are seen as being needed, by every author who thinks that [s]he can “improve” upon it [including this one].

This text is under the Equitist Advocacy group’s “omni-copyright” umbrella [see item 6, “Universal Property”, in text at:   http://www.equitist.org/Equitist/InternalAffairs/InternalAffairs.htm  ], so there are no “copyright violation” issues to hinder such circulation, whether such an edition, “improved” or not, is attributed anonymously, or under the name(s), or under (a) (the) pseudonym(s), of the improving author(s), or under the name of the Equitist Advocacy group itself [although, in that case, the fact of the “improvement” of their original text by (an)other author(s) should be explicitly noted, obviously].

Here are the links to the E.A.g.’s original version --

Alternative to the Totalitarian, Humanocidal Self-Degeneration of Capitalism -- Political-Economic Democracy


The structure/process of the disposition/management of ‘externality equities’, as a new class of collective, public, social property; of the public’s economic-democratic, collective governance of externalities — proposed herein as the «arché» of the post-capitalist social relation of production of ‘generalized equity’, in an ‘Equitist’ society of actualized ‘‘‘political-economy’’’ [of comprehensive, or political-economic, democracy] — also incarnates dialogic dialectic principles of social organization, as pictured below — 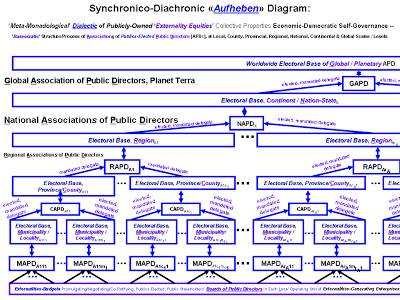 Note:  For reasons of lack of space, the Provincial and Continental levels / layers / scales of the above-depicted ‘meta-monadological’, ‘qualo-fractal’ self-governance structure/process — or human-social self-governance ‘eventity’ — are not separately depicted in the «aufheben»-diagram above, as would be necessary for a more complete depiction of the proposed governance structure/process.

Each Municipal [or Local] Association of Public Directors is, in turn, a ‘meta1-«monad»’ / ‘meta1-organizational-unit’ of the «arithmos» of the local/Municipal publics-elected public directors boards, serving on the ‘externality-equities’-managing, second, public, “grass-roots” Boards of Public Directors «monads»/ organizational-units within each local/Municipal operating unit of each externalities-producing firm impacting those local publics — those electing publics which are the public stakeholders of that local/Municipal geographical area.

Those “grassroots”, electing public stakeholders thus publicly, collectively own, and hence have right of disposition over, the externality equities generated by the externalities — the “external costs” and “external benefits” — imposed upon those citizens by those firms’ operating units’ local [‘‘‘production’’’] activities.

Those public stakeholders, or collective ‘externality-equity’ owners, via their elected Boards of Public Directors, collectively set the ‘externalities budget’— governing the externalities that they will have to experience over each coming year — as a part of the annual operating plan of each such operating unit, in continual, often adversarial negotiation / litigation / arbitration with the conventional, ‘internality-equities’ Board, or with the ‘‘‘capital-equities Board’’’-appointed “Executive Committee”, or “Management Committee”, of each such local operating unit.

However, it is crucial, to the essence of political-economic democracy, to note that, in this model, Associations of Public Directors do not elect, nor mandate — nor even, necessarily, supply, from out of their own ranks — the majority-elected, explicitly mandated, and recallable delegates who constitute the “higher”, more ‘‘‘generic’’’, Associations of Public Directors.

Only the entire public — the entire, geographical electoral-base of citizens — for each level of association of public directors, elects, and mandates, and supplies, the delegates to the next-“higher” Association of Public Directors, and also has the right to recall delegates it has elected, if, in its sole judgement, those delegates have abrogated their base-stipulated policy mandates.

The process-goal of this governance-structure is this:  to institute a ‘meta-monadological’, ‘qualo-fractal’, nested, ‘‘‘direct-democratic’’’, “grass-roots”-democratic, constitutionally, juridically-empowered, society-wide network of interlocking dialogues about the ‘‘‘human-social morphology’’’ and the ‘socio-morpho-dynamics’ / ‘socio-morpho-genesis’ / ‘socio-meta-morph-osis’ of a rapidly capital-relation-tyranny-transcending human society, and also about the total magnitude, and about the distribution / allocation, of the accumulation of capitalist-firms-generated — and stewardship-equity-cooperatives-generated — externalities that human-society will henceforth permit to be inflicted upon itself, by itself.

Popularly-elected Associations of Public Directors at the local, regional, national, and, eventually, continental and global levels can then begin to democratically reshape the human geography of global human society, in accord with the will of the majority of human beings, as expressed via these publicly elected, political-economically democratic institutions.

This economic-democratic governance process/structure is designed to help overcome the utter prostitution — by ‘Meta-Nazi’ Plutocracy “Big Money”, and by other, e.g., other Big Corporate, “Big Money” — that otherwise vitiates the “popularly-elected” representative-democratic legislatures, executives, and the appointed judiciaries of conventional capitalist, political-only, “representative” “democracy”, especially during the most “advanced”, ‘[partial] state-capitalizing/totalitarianizing’ stages of the historical accumulation / expropriation / concentration / consolidation / centralization process of capital-value ownership / control / power monopolization, by an ever-shrinking -- and increasingly ultra-criminal -- minority of the human population.

Some of the remnant private-capital-based enterprises, and joint-stock-company capital-based enterprises [“limited-liability corporations”], can be expected to tend to migrate, from Association of Public Directors, e.g., national jurisdictions which enforce strict equity in the management of those enterprises’ productions and accumulations of socially-entropic externalities, to, e.g., other national jurisdictions which tolerate the continuation of an abusive regime of external cost dumping upon their local publics.

Counter to the resulting tendency to form a “global race to the bottom” by remnant private capital, the Associations of Public Directors must be granted a constitutionally-mandated authority – e.g., via a tax on fixed capital / means of production assets — to replace the local supply and employment functions of any such “runaway shops”, by the establishment of social-property-based, democratically producer-managed, cooperative enterprises, instituted via a grant of stewardship of the requisite means of production, under the ‘Citizen Stewardship Equity’ constitutional rights, to the most qualified local collective of citizens, as established by the constitutionally mandated, and legislated, qualification criteria and bidding process, e.g., through ‘‘‘Social Banks’’’, as a particular class of ‘Citizen Stewardship Equity’, democratically self-managed cooperative enterprises.

The Associations of Public Directors must also be constitutionally empowered to organize boycotts of imports into their jurisdictions of products/services marketed by such “runaway shops”.

Through such processes, a gradual net conversion of “private” capital, and of “joint-stock” capital, to ‘‘‘social property’’’, under management via the ‘Citizen Stewardship Equity’ social relation of production, is expected to ensue.

The above-presented propositions conclude our preliminary introduction to the concepts of ‘Comprehensive, or Political-Economic, Democracy’, of ‘Citizens’ Externality-Equity’, of ‘Generalized Equity’, of ‘Equitism’, and of ‘Equitarian Society’.

For a different but related view, regarding the traditional concepts of “workers’ councils”,  or of ‘‘‘true soviets’’’, of ‘‘‘free associations of producers’’’, or of ‘‘‘producers’ associations’’’ — of ‘democratic communist’, or of “council communist” — structures of direct-democratic human-social self-governance, i.e., of ‘Marxian Democracy’, simply click on the following link —
Workers Councils and the Economics of Self-Managed Society