A Seminal Motif Mostly Still Missing from ‘‘‘The Modern Mentality’’’.


A Seminal Motif that is Mostly Still Missing from ‘‘‘The Modern Mentality’’’ as a Conscious Conceptual Resource.

There exists a key conceptual insight and resource, one crucial for comprehending our world -- our universe, our cosmos -- even merely up to the level already latent in the data of modern science, that the prevailing -- capitalist -- «mentalité» still hides from itself.

That concept is that of what we call ‘onto-dynamasis’, which is about the ‘dynamicity’ of the actual ontology of our cosmos as a whole.
Ontology is dynamical, and, for the most part, cumulatively growing.  Our cosmos is continually adding new “kinds” -- new, previously unprecedented categories of “being”, or, better, of “becoming”, of ‘‘‘eventity’’’ -- to itself.
The ontological content referenced and represented by old, existing, already cognized ontological categories continually interacts, and, crucially, also self-interacts, in ways that continually irrupt new ontological content -- content, at first not yet cognized,  that needs to be referenced and represented by new, previously-unprecedented names and categories.

Our cosmos is a veritable cornucopia of the continual genesis of new ontology.  It is and always has been an engine of neo-ontological creativity.
That ‘onto-dynamical’ creativity applies also to we humans as part of that cosmos.  And the ontological creativity of the human part of Nature includes a new ‘onto-dynamical’ dimension, that of ‘ideo-onto-dynamasis’, as well as new kinds within the old dimension of ‘physio-onto-dynamasis’, or of ‘«physis»-onto-dynamasis’, and also includes, especially, those parts of the human [sub-]creation that exhibit the correlated co-creation of new ‘ideo-ontology’ together with new ‘physio-ontology’.  Example:  the money ‘‘‘meme’’’ within the human Phenome, correlated with coin objects.

This view of ontology is 'ontologically pluralistic' with temporally-increasing ontological plurality, in opposition to 'ontologically reductionist' monisms, dualisms, 'triadisms', etc., but is also 'meta-genealogical', or 'lineage-ic', tracing back to original, singular, 'ultimate ancestor' ontological categories, or ultimate arche' categories, for the cosmos as a whole --  the universe as ultimate totality -- and for each of the Domains which constitute its 'sub-totalities', or 'sub-universes'.

However, when it comes to ‘quanto-dynamics’, that kind of dynamical paradigm pervades the modern worldview.

In its elaborated expressions, this pervasion includes the state-space representation of “evolution”, in which a coordinates-point, representing the total “state” of a given “dynamical system”, moves in a “space” formed by a fixed number of mutually-perpendicular dimensions and axes, each one representing and measuring, quantitatively, a [qualitatively] different “vital sign”, or “state-variable”, of that system, thus constituting the “coordinates” of that system’s ‘state-point’ in its “state-space”.  The variation with time of the quantitative values of these “vital signs” thus traces out a unified trajectory in that “space”.  [“Total”-] differential equations, describing the “law” of motion of the given system, can then be solved by well-known methods [if those equations are “linear”, or sufficiently close to “linearity”], yielding a solution-function that one can use to deterministically compute the momentaneous state of that system for any moment, i.e., for any value of the “Real”-number time parameter, “past”, “present”, or “future”.

But such a state-space is a fixed space, with a fixed dimensionality, and a fixed spectrum of system qualities or system attributes, represented by the state-variables and their axes.  There is no provision for ‘qualo-dynamics’ -- for ‘onto-dynamasis’; for the emergence or irruption of new system ontology, with its new system qualities, its new system attributes -- should the “evolution” of a given system arise to the point of [ontological, qualitative] revolution, or ‘‘‘meta-evolution’’’.
For example, if a system evolves to a “singularity” -- e.g., if the solution-function computes, in forward time starting from at a specific, finite value of the time parameter, a state involving a division by zero -- there is no provision, in the contemporary canon of state-space analysis, to compute a ‘change of space’ at and after such a point of “singularity”, where the values of one or more of the old state-variables/state-dimensions “explode” to “infinity”.

By a ‘change of “[state-]space” ’, we mean the as-if irruption, as-if from the “origin” of that state-space, of one or more new state-variable dimensions and axes, thus changing the dimensionality of that state-space, and measuring the new, “emergent” or ‘irruptant’ qualities or attributes that are signified, however obliquely, by the very division by zero that creates the “singularity”.  Nor is there provision, in the contemporary canon, for one or more of the old state-variable dimensions and axes to as-if collapse back into that “origin”; to wither away or undergo dissolution, nor for some former control parameter space axes to become new state-variable, state-space axes, nor for some former state-variable state-space axes to transfer to new axes in the also thus changing control parameter space.  The Seldonian NQ_ arithmetic for dialectic is axiomatically designed  to facilitate its users in conducting ‘onto-dynamical’ computations, but, however, not at the state-space/control-parameter-space, nonlinear differential total-equation level, but at the much simpler, algebraic, ontological-categorial combinatorics level, using a heuristic solution-algorithm.

Until the cosmological ubiquity of the ‘qualitative dynamism’ of self-changing, self-expanding ontology -- and the ubiety and localization of the latter as the “universal labor” of human Nature -- becomes more widely grasped within the advancing ‘human Phenome’, Terran humanity will go on not noticing key discoveries, and, hence, key opportunities, that are already extant in the data of the modern sciences, but not yet cognized as such. 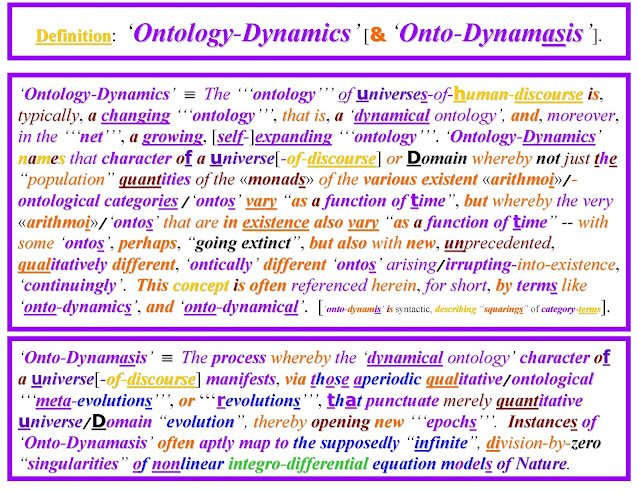 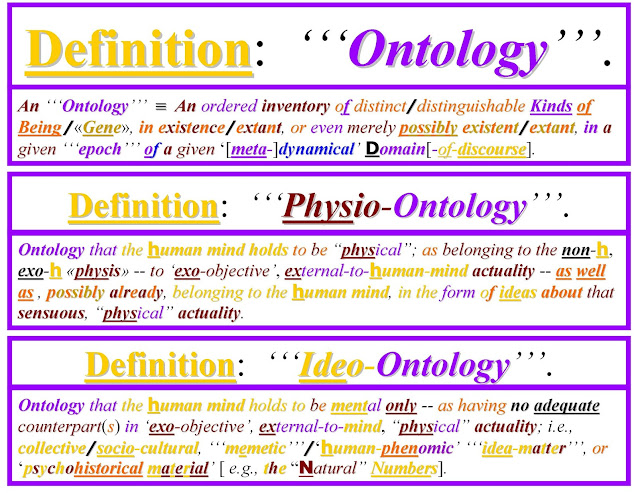