The Avengers Movie as a Psychohistorical Phenomenon in the Seldonian Sense

The global box-office surge for the latest of the Marvel Comics movies -- “Avengers: Endgame” -- is, without doubt, a ‘‘‘psychohistorical phenomenon’’’, in the Seldonian sense:  one that cries out for a similarly ‘‘‘psychohistorical’’’ explanation.

The reviewers at the YouTube “Wisecrack” channel argue that the resonance viewers feel with this concluding sequel has to do with three paradigms of time -- of human history: of the structure and content of human historical time -- with all of which the vast viewing audience of this film feels comfortable.  The following link will take you to that YouTube review-video --
https://www.youtube.com/watch?v=8H_9ZwJg2_M

These three paradigms of historical time are being played out, in this movie, and its many “prequels”, per the “Wisecrack” reviewer, at the level of the life-story arcs of individuals, of the individual personalities who constitute key characters in this series:  Captain America, Thor, and Iron Man.
Per this review, Captain America embodies a “fixed point” of unchanging, “eternal verities”; a quasi-Parmenidean paradigm of time:  certain ethical principles, certain values, are unchangingly true for all times, e.g., Captain America’s hostility to bullies of all stripes.
The Thor story, on the contrary, instances the kind of “cyclical time” paradigm common in ancient mythologies in particular, and in the pre-modern mentality in general.  Thor’s story is of an undulation of dizzying, supernatural high points, followed by devastating low points, followed by re-ascendance to the heights again, and so on..., albeit with a slight hint of “helical” progression in that “circulation”, e.g., toward greater self-acceptance, in that otherwise mostly circular, hence gainless, ride.
Iron Man’s story, contrary to both the Thor story and the Captain America saga, per the reviewer, embodies the modern, rectilinearly progressing, ever-improvement «mentalité» about temporality.

These three paradigm’s, we find, are, indeed -- if perhaps unconsciously, or only semi-consciously -- known to, and ingredient in, the contemporary viewer psyche.  But all three miss a far more realistic paradigm about time, which we shall call, here, the ‘helical-vortical’ view of time.

Per this, fourth, view, short-term “cycles” are integrated together with a rectilinear progress of continuing advances, each on unprecedented.  But there is also an ‘intra-duality’ to this progression, in which, to advance in one dimension requires, for a time, a “progression” into adversity in another, coupled dimension, until a ‘‘‘singularity’’’ irrupts, in which both dimensions can finally advance together, the adversity healed.

At the level of our common history, as humanity -- as the Terran human species -- there is no better expositor of this paradigm than Karl Marx.

In his view, the progress of the social forces of production -- of the ‘self-productivity’ and ‘Meta-Darwinian self-reproductivity’ of humanity -- is purchased, throughout the epochs which Marx calls the ‘‘‘prehistory’’’ of humanity, by an ever-deepening side-ways dive into growing social alienation.

Beginning at a minimum of social alienation, in “primitive communism”, within each tribal community [but not between them], this social alienation waxes in phases, from “detribalization” and the cleavage of society into opposing classes -- of slaveholders versus salves; of “lords” versus serfs, etc. -- and in the form of the growth of “universal alienation”, at first as “production for alienation” -- production of commodities for sale, and selling [“alienation”] of commodities, at first, by petty producers -- and finally, in the extremity of social alienation that is capitalist society, by “self-alienation” -- ‘self-selling’; “universal prostitution”:  wage-labor -- and by the world of estrangement -- the world of strangers -- which results therefrom.
But Marx also predicts that this social alienation dimension will not go on deepening forever.
At a certain point in the growth of the social forces of production, social conditions will become ripe for a return movement, back from the capitalist extremum of social alienation, toward a new minimum of social alienation, i.e., toward a return of human solidarity and community, but, this time, not only within small tribes, but on a global scale:  “socialized humanity”.
These Marxian, historical observations, and predictions, instantiate a ‘helical-vortical’ paradigm of time.  The radius of the “circular”, “cyclical” aspects of the structure and content of human history keeps widening in its “sideways” dimensions, encompassing more and more, richer and richer historical material, including the dimension of deepening social alienation.  But this widening spiral also rises vertically, including by signifying the progress of the human social-reproductive forces.  At a certain stage in this progression, the social forces of production reach a maximum that coincides with a new, higher minimum in the social alienation inherent in the new social relations of production:  higher communist society [by which I most decidedly do not mean Lenino-Stalinoid [proto-]state-capitalism], starting with what we call ‘Equitarian Society’.

This ‘helical-vortical’ paradigm of history can also be observed -- if we grow “eyes that can see” -- at the individual scale, in our own personal histories, in the triumphs and tragedies of our own social lives. 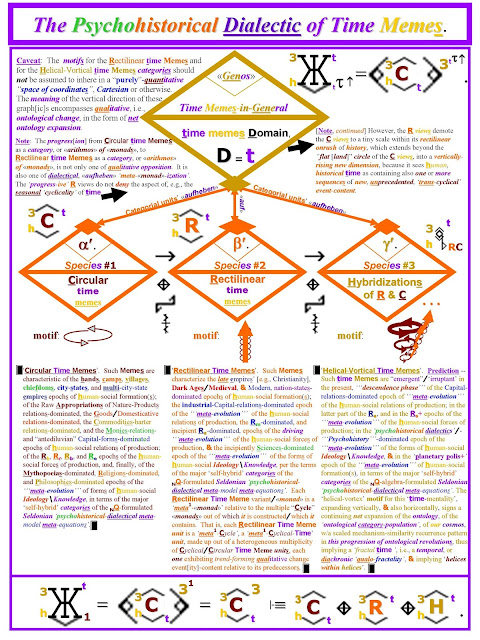